How do you get your arrow out of the target?

The best way to get your arrow out of the target is to use arrow lube. It is a protective layer around the arrow that prevents it from sticking to the target, and by using it and by combining pulling with a twisting motion, you can get the arrow out much more successfully than other methods.

Though this is considered one of the best ways to get an arrow out of the target, it is far from the only thing you need to consider while getting an arrow out, and while shooting at the targets.

How To Remove An Arrow From A Target (Free Download)

What Are Other Good Ways to Get Arrows Out of a Target?

Aside from using arrow lube, some other methods and techniques could help you get the arrows out of targets.

The Use of Arrow Lube 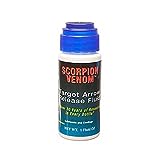 Going over the use of arrow lube again, there are a few tips you should be aware of before you use this technique. It is one of the best ways to prevent the arrows from getting stuck, and it won’t cause the arrow to go deeper into the target.

Instead, it will just reduce the friction a bit between the target and the arrow. Additionally, be careful not to put the lube too high up the arrow, it should only go up the first 3 to 4 inches of the arrow, or it could cause the arrow to lose grip.

Slightly Twist While You Pull

Trying to pull the arrow straight out of the target doesn’t give you as much grip as a slight twist would. One of the best ways to ensure that you have a good grip is to place some padding between your hand and the arrow, to protect from blisters, before slightly twisting as you pull the arrow from the target.

Be careful not only to twist enough to break the connection/latch between the arrowhead and the butt of the target, and not to bend the arrow accidentally.

The Use of Ivory Soap

Akin to using a specified arrow lube, some active archers will use ivory soap instead. They will rub the soap around the end of the arrow, the same as with the arrow lube, before shooting the arrow. For ivory soap, you only need to cover the first 2 to 3 inches of the arrow with the soap. You should also reapply the soap every few shots.

Use An Arrow Puller 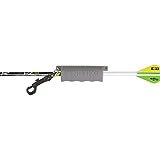 Before you start using arrow pullers or trying to get lodged arrows out of targets, there are a few essential safety tips you should consider before you start.

Make Sure No One Is Behind You

Pull the arrow straight out

Try Not To Leave Arrow Heads in Targets

Tips For Different Types of Arrowheads

Learning how to get an arrowhead out of a target is far from the only thing you need to consider when you are firing arrows and removing them from targets. The type of arrowhead you use will also impact the difficulty of getting your arrow out of the target.

These arrow points are considered typical and a “go-to” type of arrowhead for many archers. However, a common mistake for these types of arrowheads is that they’re not perfectly lined up with the shaft like they need to be.

If they’re not perfectly matched, they can become incredibly stuck in the target butt. These arrowheads should only be used for targets, and they only make smaller entrance holes, making it among the easier ones to get out of the target if used properly.

, so it’s essential to consider that before deciding to use one of these. These types of arrowheads should not be used with foam or bag target butts.

Screw-In Points and Getting Them From Targets

Screw-in arrowheads are incredibly tricky to get out when they’re stuck. Sometimes, it may be better just to unscrew the arrow and leave the arrowhead in the target if it’s not coming out with an arrow puller or the lube didn’t help. There are a few tools you can try, like an arrow point puller, that may be able to get the tip out if nothing else is working.

Though considering how you can get the arrow out of the target and types of arrowheads, is not the only way to make your life easier when it comes to removing the arrow. Another thing you can consider is the different types of target butts you can fire into that could be easier or harder to get the arrow from depending on which you choose.

What Type of Target Butt is Easier to Get Arrows from?

There are many different types of target butts you can use, with each having varying benefits and drawbacks depending on the model you have.

This option is the best for beginners and is among the cheapest options for target butts. They’re unfortunately not very long-lasting as they are a bit weaker and less durable than others, but they are easy to lodge an arrow into and to get one out in turn.

These target blocks are among the most popular options. This does not mean they are the perfect solution, as it is possible to get arrowheads lodged in them and stuck if you use a heavy draw weight that sends the arrow incredibly deep into the foam target.

This option is one of the more basic types of target butts. This is because they are made of a synthetic fiber that is easy to get an arrow out of and efficiently stops the arrow.

Though 3D targets can be incredibly fun

to shoot at, it is easy to get your arrow lodged in the foam target and the arrow getting stuck with no way of getting it out. Even though they are fun, they are not among the easiest targets to get an arrow free from.

Choosing which target you use will influence how hard it will be to get the arrow out of the target—mainly on the type of arrowhead you have gotten stuck in the target. Each target has different pros and cons, depending on your needs, arrowheads

, and budget while practicing with the arrows.

How To Ensure Safety While Practicing Archery

It is incredibly important to practice safe caution while you are practicing archery, whether you’re at home or otherwise. Archery accidents can happen incredibly quickly and cause severe damage.

Every year there are approximately 4,300 youths that are injured while participating in archery activities. To ensure that no one is injured because of unsafe archery practices, keep the following tips in mind while practicing at home.

Dress Properly For The Sport

Make Sure To Inspect The Equipment

Fire in a Secluded Area/Buffer Zone

Make Sure No One is Directly Behind You

Grass Should be Trimmed

Safety should be your top priority while you are practicing archery, whether you are paused to get an arrow out of a target, and just otherwise practicing for fun. Accidents can happen incredibly quickly, but these tips can help you prevent hospital visits while practicing.

If you are practicing proper archery safety and appropriate means to preventing your arrow from becoming stuck, you can make the problematic practice of getting the arrow from the target much easier than it otherwise would be. For example, ensuring you have appropriately used the correct lubrication, purchased the right arrow puller, and know which arrowheads suit the target’s butt better.

Before you even launch your first arrow, you should be aware of the best arrowheads, and butts as well as the correct way to set up your targets safely to avoid injury of yourself and others participating with you. There are many ways to be injured while participating in archery for sport and recreation if you’re not taking the correct precautions.

9 Indisputable Reasons Why Archery Is A Sport

Steven Lines is a hunter and outdoorsman from Safford, Arizona, USA. Since he was a child, he has been hunting and fishing and has over 20 years of outdoor experience. Steven works as a hunting guide in Arizona during his spare time and runs a Youtube channel

dedicated to sharing his outdoor adventures with others.

Hi, I'm Sam! I used to work as a caregiver, and now I'm in medical school. My blog is about helping people get healthier through fun activities like archery, hunting, and powerlifting. If you like one of my articles, please share it with your friends and family so they can be healthy too!

link to How Much Does It Cost To Process An Elk?

Fact checked by Steven Lines, lifelong Hunter and Outdoorsman. Elk are very large animals and yield a lot of delicious meat once harvested. Elk meat is also one of the tastiest and most...

Continue Reading
link to Will A 150-Grain Bullet Kill An Elk?

Fact checked by Steven Lines, lifelong Hunter and Outdoorsman. Elk hunting has many different topics that are openly debated, and one of the most heated arguments is over bullets and bullet...

The Body Training is a participant in the Amazon Services LLC Associates Program, an affiliate advertising program designed to provide a means for sites to earn advertising fees by advertising and linking to Amazon.com and affiliate programs with other sites. We are compensated for referring traffic and business to these companies at no additional cost to you. It helps us keep the research and information for our readers free 100% of the time. Happy Training!